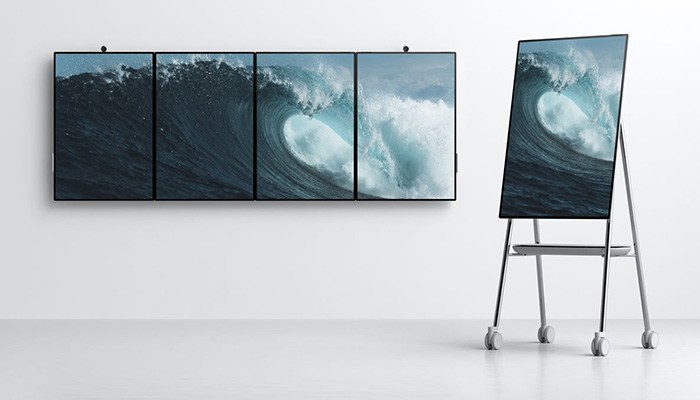 Microsoft Presents New Surface Hub 2 Digital Whiteboard. Microsoft has offered the successor to its digital whiteboard Surface Hub. Multiple copies of the new model can be linked together as one large screen.

The Surface Hub 2 is aimed at meeting rooms in companies. The new model has a 50.5-inch touchscreen with 4K resolution.

The screen can be used both vertically and horizontally, just like tablets. With particular standards and wall hooks, users can turn the big screen.

The interface then runs, also similar to how it happens on tablets.

Multiple screens can be linked together, as one large screen or as numerous separate screens for the same user.

Video calling
Multiple users can log in to the Surface Hub 2 simultaneously, with a built-in fingerprint scanner.

During meetings, different employees can easily display their presentation via the screen. With an accompanying pen, can make notes on the screen.

The Surface Hub 2 can also be used as a giant video calling screen, thanks to a removable 4K webcam.

The camera equipped with exceptional microphones so that sound can get capture from the entire room.

If the screen is in a vertical position, it’s easier to view conversation partner from his waist.

The Surface Hub 2 will not appear until 2019, and Microsoft has not announced a sale price yet. The first Surface Hub appeared in 2015,

Recently, Microsoft said it had sold Surface Hubs to over five thousand companies in 25 countries.